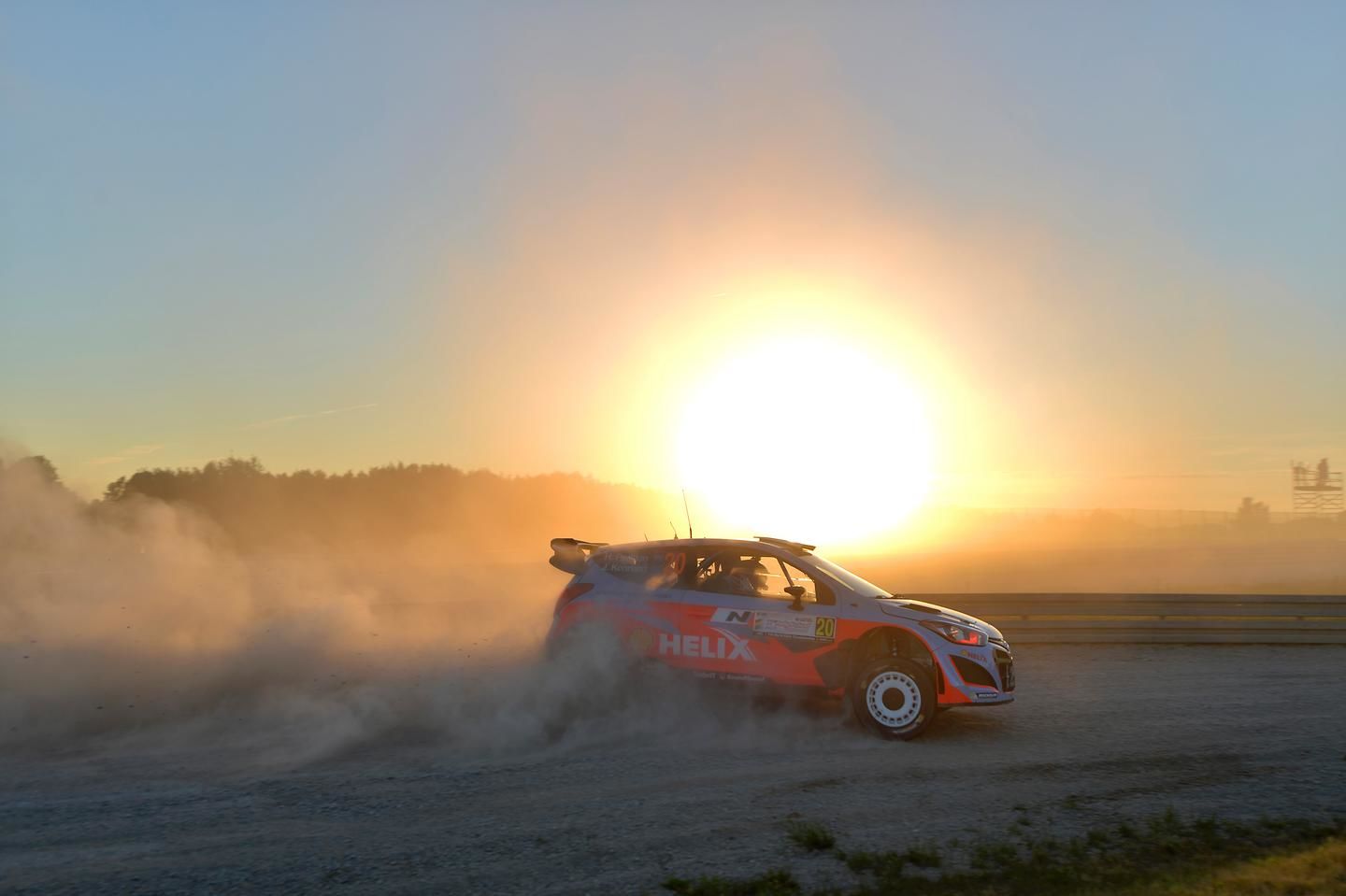 July 25, 2014 - After a short summer break, the Hyundai Shell World Rally Team will resume its debut campaign in the FIA World Rally Championship at Rally Finland next week, the fastest and most spectacular round of the series.

The Alzenau-based team secured a well-earned podium result in Poland last month with all three Hyundai i20 WRC cars finishing a WRC event for the first time. The team will be aiming to continue its steep rate of car development, using the rally to collect more data and information for the remainder of the 2014 WRC season.

The team will once again field three Hyundai i20 WRC cars with Belgian pairing Thierry Neuville and Nicolas Gilsoul behind the wheel of car #7, local heroes Juho Hänninen and co-driver Tomi Tuominen returning with the #8 car and New Zealander Hayden Paddon – navigated by John Kennard – at the helm of car #20 (entered under the Hyundai Motorsport N banner).

The surface at Rally Finland is formed of compact, smooth gravel roads, where fast and wide sections alternate with narrower and more technical ones. What makes Finland unique, though, are the breath-taking jumps, which can hide bends over the crests. These roads require drivers to be brave, have very precise pace notes and choose the correct line to tackle the jumps.

Preparations for Rally Finland were held earlier this month in the region of Jämsä in Finland where the team carried out a test with Neuville and Hänninen, while Paddon will test the Hyundai i20 WRC this coming Sunday.

The team’s campaign in Finland will begin this Saturday with the Helsinki Battle, a new event held in the harbour of the Finnish capital city to whet the appetite ahead of next week’s rally, where the WRC stars of today will challenge the legends from the past in a thrilling competition. Two-time World Rally Champion Marcus Grönholm – who had a first experience behind-the-wheel of the Hyundai i20 WRC at a test last winter - will partner Hyundai drivers Neuville and Hänninen at the event, which will also be streamed live on www.wrc.com.

After a rewarding event in Poland, the Hyundai Shell World Rally Team is aiming to continue its momentum by finishing Rally Finland with all three Hyundai i20 WRC cars entered into the Jyväskylä-based event.

Team Principal Michel Nandan commented:  “Our objective for Rally Finland, as always, will be to get as much data and feedback as possible and that means getting all three cars to the finish. We have an excellent driver line-up with Thierry, Juho and Hayden as they all have a good experience of the event and the skills required to cope with the high-speed stages. Juho is a local so he knows exactly what it takes to be successful in Finland, Thierry finished second last year and Hayden won the Group N category back in 2010. We tested in Finland earlier this month so we have a good understanding of the direction we need to take with the Hyundai i20 WRC set-up. We’ll be introducing some updates in Finland, including an upgraded wet liner cylinder block, using one of the ‘jokers’ that we’re allowed during the year by the FIA.”

The Hyundai Shell World Rally Team’s lead crew Neuville and Gilsoul scored a podium finish last year at Rally Finland – on only their second outing at the event – and they are determined for another successful event after their Polish podium.

Neuville said: “I’m really looking forward to Rally Finland, it’s a very special event with so many spectators and probably the best jumps of the entire season. Nicolas and I finished in second place there last year in only our second time at the event and - after the strong result in Poland last month - we really hope we can continue the good work in Finland as well. The target for us remains the same as always: to do the best we can to bring our Hyundai i20 WRC to the finish and help the team to continue the development of the car.”

“Flying Finn” Hänninen has a proven record at Rally Finland having won his class several times in the past (SWRC, PWRC and Group N). Hänninen, will be co-driven once again by his compatriot Tuominen, so the crew has an extra motivation for their home event:

Hänninen said: “Because it’s my home rally some people think there is more pressure on my shoulders to achieve a good result but I have learned during my career that stress doesn’t help. On the contrary, I’m even more motivated because it’s the rally I know much better than all the others and everything is much more familiar to Tomi and I. My first Rally Finland was in 2006 and I’ve always had good fights there and had some very good results in my class. Many times you have to be over the limit but it’s really fun and a big pleasure to drive on the stages.”

After competing in unknown territory in Italy and Poland, Paddon goes into Rally Finland with confidence as it’s an event he knows quite well. For his co-driver Kennard, Finland is like a home away from home.

Paddon said: "It’s going to be nice competing in an event we know well for the first time this season. Finland is almost a second home for me and John as some of the roads are quite similar to New Zealand and I have enjoyed the fast nature of the stages. Of course it will be a big challenge as all the drivers will be very quick and both the speed and the commitment levels are high. From our side we would like to continue our progression from Rally Poland and continue to get closer to the leaders.”

Rally Finland is the eighth round of the 13-event WRC season, and marks the end of a four-week break for the WRC. All the action will be spread over four competitive days and a total of 360km divided into 23 stages. This year’s itinerary will be a mix of traditional and new stages like Päijälä, Pihlajakoski, Jouhtikylä and it will include the 2.2km Harju test – run in the city centre in Jyväskylä – which was last included in a WRC route in 1998 .

To download high resolution photos for editorial use, full driver’s profiles as well as other useful press information about the team please refer to: