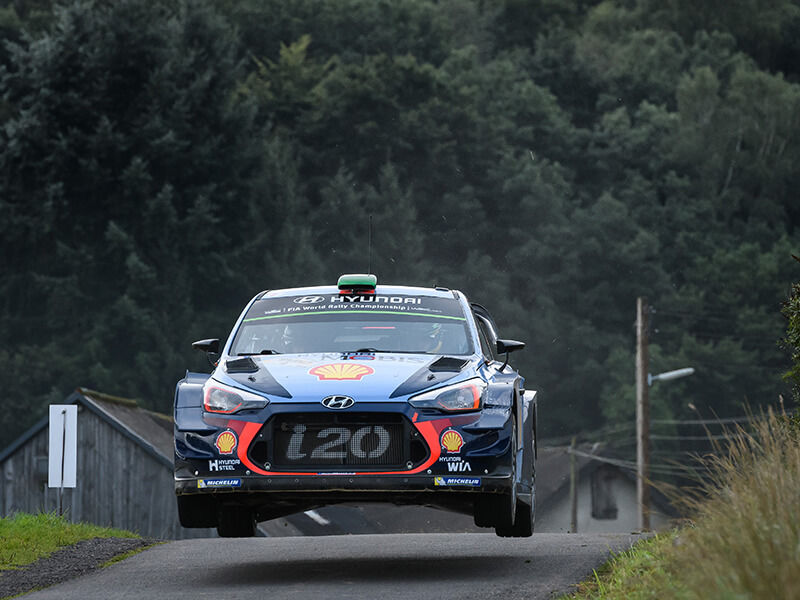 Hyundai Motorsport heads into the six-week break with clear intentions to refocus on its championship campaign after a tough weekend in Rallye Deutschland, the tenth round of the 2017 FIA World Rally Championship (WRC).

Despite being a home rally for the Alzenau-based squad, and a happy hunting ground for results in the past three seasons, none of the team’s three crews have had cause for celebration this weekend.

Hayden Paddon and Seb Marshall were the highest placed Hyundai Shell Mobis World Rally Team pair, down in eighth place. Dani Sordo and Marc Martí were put out of contention early on Friday morning after rolling down a bank, and forced to start again under Rally 2 on Saturday.

Thierry Neuville and Nicolas Gilsoul also had to make use of Rally 2 to re-join on Sunday morning, after their rally was brought to a sudden halt on Saturday’s opening stage. All in all, It was an unrepresentative weekend for Hyundai Motorsport overall, although it ended on a positive as Sordo claimed Power Stage victory and five extra points towards his drivers’ championship total. That result saw Sordo take a total of five stage wins, equal with rally winner Ott Tanak.

Paddon and Marshall suffered two separate punctures over the weekend, which cost them time on Friday and Saturday. In their fifth event together, the crew continued to push and were rewarded with a handful of top-three times later in the rally, including second in Sunday’s SS20 (Losheim am See).

Paddon said: “When conditions were more consistent, we showed some improvement in performance compared to last year, so there are some positives to take away from this tough weekend. I knew this would be one of the hardest rallies of the season, so I am pleased that we made it to the end, and showing better stage times. I am going back home to NZ for a month, during which I will also take part in a few gravel rallies, so I am looking forward to that. Then, it’s back to Europe when we will begin our push for a good result to finish the season.”

For Sordo and Martí, their hopes of a third podium of the season were ruined after an off on Friday morning. However, the Spaniards showed improved performance on Saturday, including three stage wins, and ending the rally with Power Stage victory on Sunday.

Sordo said: “This hasn’t been the rally we wanted at all so it was nice to end it with a win in the Power Stage. It shows what we might have been able to achieve without our problems this weekend. I am disappointed in myself for the mistake I made on Friday, which ended our hopes of a good result. I am sorry to the team for what happened, but we have tried to perform better in these past two days. Now, all I can do is look forward to my home event in Spain where I will be trying all I can to get back onto the podium – and plan to finish the season in the best way possible.”

Having moved into the podium positions at the end of Friday, it was a stark turnaround in fortunes for Neuville and Gilsoul on Saturday. Forced to restart on Sunday morning under Rally 2, the Belgians struggled for pace and saw their run of Power Stage points broken as well.

Neuville said: “We made too many small mistakes this morning and struggled with the handling of the Hyundai i20 Coupe WRC. We didn’t have enough time in the car on Saturday to prepare ourselves in the best way for these final stages. It’s obviously a massive disappointment to come away with so little from a rally in which we were hoping to be at the front. The championship is not over. I will give everything to turn things around in the final three rounds of the season.”

Hyundai Motorsport will return to its factory in Alzenau to reflect and learn from a difficult home rally weekend.

Team Principal Michel Nandan said: “Not so much a weekend to forget, as a rally from which we must learn and bounce back. We thought we would be able to mount a stronger challenge in our home event, but for a number of different reasons we were just not able to do it. We know from other rallies this season that our Hyundai i20 Coupe WRC is competitive, so this result is hard to accept. As I said after our disappointing Saturday, it is not in our nature to give up without a fight, and that’s the mentality with which we will tackle the three remaining rallies. Dani’s victory in the Power Stage gives us a bit of lift as we head into the long break.”

The WRC takes a six-week break before returning for Rally de España, which takes place from 5-8 October. It will act as the 11th round of the 13-event 2017 season.

The Spanish round of the championship is the only mixed surface rally of the season, tackling gravel and tarmac terrain.