Hyundai Motor Company Australia (HMCA) has landed the first 20 zero-emissions NEXO Hydrogen fuel-cell electric vehicles (FCEVs) in Australia. They will be deployed by the ACT Government fleet from the third quarter of this year. The deployment represents a realisation of both Hyundai’s and the ACT Government’s long-term commitment to zero emissions transport in Australia.

The zero emission NEXO SUV is the first hydrogen-powered vehicle to meet Australian Design Rule (ADR) certification and the 20-strong NEXO fleet in the nation’s capital will represent the first use of hydrogen vehicles by any Government in Australia. The SUVs will be deployed in a variety of roles across several ACT Government departments

The Lennock Hyundai dealership in the ACT suburb of Phillip will provide service and support for the fleet during this initial deployment of NEXO FCEVs – Lennock therefore becomes the first dealership in Australia capable of servicing hydrogen-powered vehicles.

Canberra’s first 700-bar hydrogen refueling station will provide filling capability for the fleet and will open in the third quarter of this year, in conjunction with NEXO’s official launch in Australia. It will become the first publically-available hydrogen refuelling station in the country and the only permanent facility of its kind.

The new Canberra station will join the private hydrogen refuelling station at Hyundai Motor Company headquarters in Sydney. In addition, hydrogen refuellers in Brisbane and Melbourne are expected to be completed by the end of 2020, with stations also planned for NSW, South Australia, Western Australia and Tasmania.

HMCA’s own hydrogen station has been operational since 2015, which coincided with the arrival of the ix35 Fuel Cell - the first hydrogen-powered vehicle to be permanently imported into Australia.

Hyundai Motor Company Australia CEO, Mr. Jun Heo, said that although hydrogen mobility is not yet a mainstream alternative in Australia, the company’s progressive vision will help the technology play a key role in a low-CO2 motoring future.

“For a long time, hydrogen has been touted as the fuel of the future. However, with the arrival of a fleet of NEXO FCEVs for the Australian Capital Territory Government, we’re pleased to say that it’s now the fuel of today,” Mr. Heo said.

“NEXO is the embodiment of our long-term commitment to introducing hydrogen-powered transport in Australia and around the world,” he said.

“As part of a line-up that includes hybrid, plug-in hybrid and pure electric models, NEXO underscores our leadership in eco-mobility and our commitment to a sustainable, low-emissions motoring future in this country,” he said. 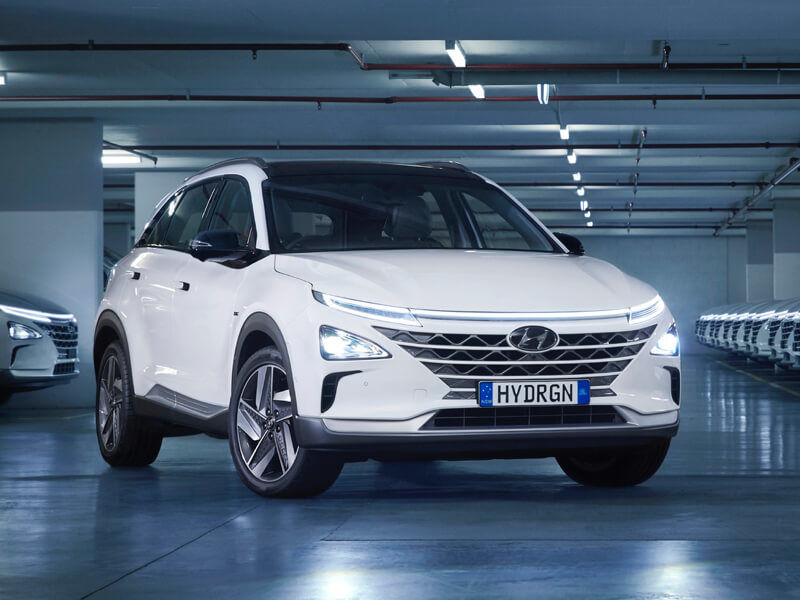 With NEXO joining the line-up, Hyundai is the only brand in Australia to offer hydrogen fuel-cell electric, hybrid (IONIQ), battery electric (IONIQ and Kona) and plug-in hybrid (IONIQ) vehicles.

The Hyundai NEXO offers a range of 666km (WLTP) with a refuelling time of three to five minutes, in a futuristic SUV platform that emits only water vapour from its exhaust and also purifies the air as it drives.

NEXO has a near-silent drivetrain, offering much-reduced external noise which is especially beneficial in urban environments.

Its introduction follows the release of Australia’s National Hydrogen Strategy which was unanimously endorsed by the Council of Australian Governments (COAG) at the end of 2019. The strategy acknowledges the important role hydrogen mobility can play in achieving its target of establishing Australia at the forefront of the global hydrogen industry by 2030.

Hyundai Motor Company Australia welcomes the National Hydrogen Strategy and is working on its implementation with governments and other stakeholders. As a co-founder of the Australian Hydrogen Council, Hyundai is proud of the work completed over several years to help develop and grow a sustainable hydrogen industry in Australia.

From hybrids to hydrogen fuel cell: Hyundai celebrates 30 years of innovations in eco-mobility.

A History of Hyundai and Fuel Cell Technology.