Hyundai Help for Kids: In for the long haul.

Hyundai Help for Kids joins tireless efforts to raise funds across the country. 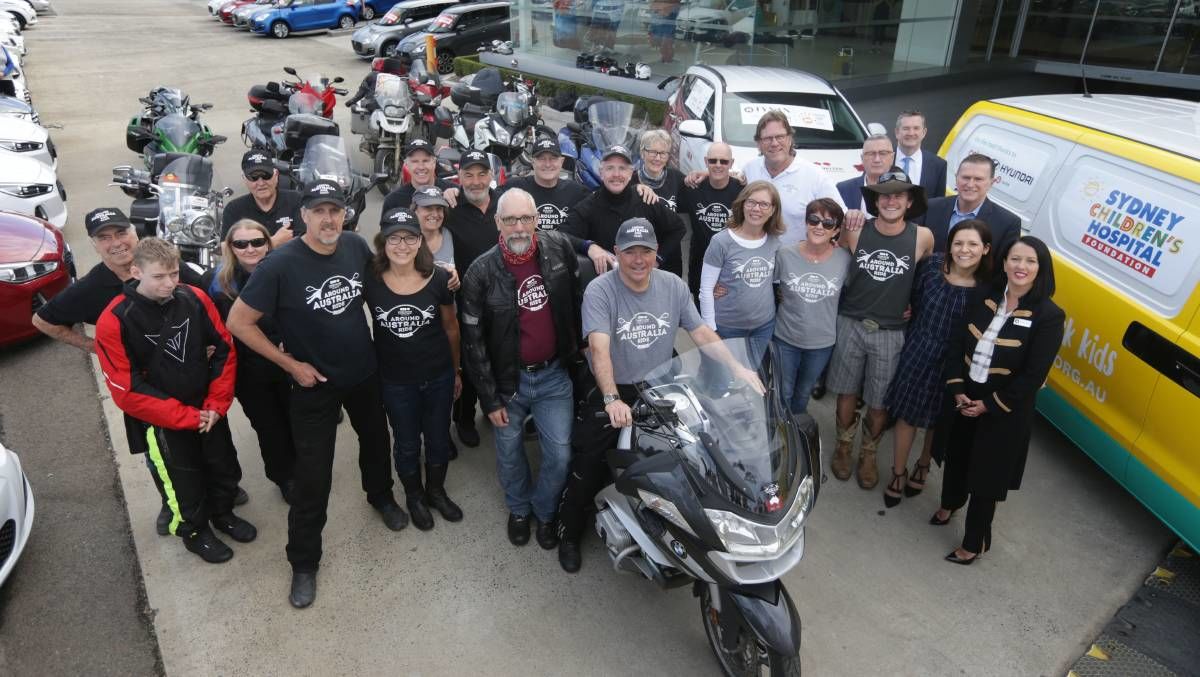 It’s been a veritable festival of giving, as Hyundai Help for Kids – the charitable arm of Hyundai Motor Company Australia – has brought multiple charities together to raise money for many and varied worthy causes.

And when that many charities get together, it’s as if good is being multiplied, with the Sydney Children’s Hospital Foundation’s Gold Appeal Mobile, the Steven Walter Children’s Cancer Foundation Around Australia Ride 2018 launches (with the support of the Westpac Rescue Helicopter crew), and Hyundai providing a money-can’t-buy experience for one lucky family at the A-League Grand Final in Newcastle.

It’s just the latest incredible example of the giving power of Hyundai Help for Kids, which has exceeded a whopping $6 million in funds raised since its inception in January 2014.

This myHyundai editions feature includes a remarkable group of motorcyclists who put their bodies, and in particular their backsides, on the line to assist in the search for a cure for children’s cancer, by riding a staggering 15,000km around Australia in 34 days as part of the Around Australia Ride 2018 in support of the Steven Walter Children’s Cancer Foundation (SWCCF).

The ride, which passed through 80 cities and towns – raising funds and awareness – has taken a year to plan and features 12 riders and two pillions, most of whom have taken time off from work and will pay their own way to undertake this charitable marathon.

The riders, the oldest of whom is 71 and the youngest 24, were joined by a four-strong support crew, following behind them with some of the 12,000 litres of petrol and multiple sets of tyres they went through, in a Hyundai iMax and a Hyundai Santa Fe, both donated by SWCCF’s platinum partner, Hyundai Help for Kids.

This year’s Around Australia Ride was kicked off at Tamworth Hyundai on May 11, with an energy-boosting barbecue hosted by one of the local charities supported by the town’s local dealer, the Westpac Rescue Helicopter crew.

Mark Woodley, Dealer Principal at Tamworth Hyundai, was particularly excited to be able to bring together two such worthy causes under his roof.

“Today’s launch is special because it manages to capture our passion for supporting Aussie families doing in tough at a national, regional and local level. Hyundai Help for Kids, Steven Walter Children’s Cancer Foundation, Sydney Children’s Hospital Foundation and the Westpac Rescue Helicopter share a common goal of helping those who need it most from cancer research right through to transport to hospital for treatment,” Mr. Woodley said.

The riders concluded this EPIC fundraiser at Tynan Hyundai in Kirrawee, in recognition of the support of ride sponsor Hyundai Help for Kids, Kirrawee is also the location of SWCCF’s head office and was Steven Walter’s home town until he passed away aged 19 in the year 2000 after battling cancer for 8 years.

The arrival celebration was made all the more special when the announcement was made that they had raised $110,000, a tremendous effort from all involved.

Together we continue to work hard towards our vision of one hundred per cent survival for all children with cancer and the prevention of their suffering said Susan Walter, Co-founder, Chief Executive Officer of SWCCF.

In order to reach regional and rural communities, the Sydney Children’s Hospital Foundation 2018 Gold Appeal took to the road throughout May and June, allowing Hyundai to chip in by lending its fundraisers a Hyundai iLoad for the trip – known as the Gold Appeal Mobile. The iLoad was painted with a gold theme and branded for the duration of its tour across country NSW. The Gold Appeal is held every May and June and culminates on Gold Telethon Day (June 11), with a live fundraising broadcast on Channel 9.

As part of the Gold Appeal, Hyundai Help for Kids was delighted to be able to help facilitate a very special match-day experience for a boy called Levi at the scintillating Hyundai A-League Grand Final in Newcastle on May 5.

Levi, who had his eighth birthday just two days after the big game, has been diagnosed with a brain tumour and is now in a stable condition after having extensive treatment at the Sydney Children’s Hospital. As you would expect, Levi was beyond excited about this trip to such a massive football game, and was particularly chuffed when the whole crowd sang ‘Happy Birthday’ to him before kick-off. Levi and his whole family also enjoyed a behind-the-scenes tour of the McDonald Jones stadium, watched the teams warm up at close quarters from the sidelines, and got to toss the coin for the start of the game with the referee and the two team captains.

Hyundai Help for Kids is the Australian extension of Hyundai’s global Corporate Social Responsibility program, Moving The World Together, and has provided grants totaling $6,471,391, as of August 1, to a range of organisations dedicated to helping children and their families in times of need.

This incredible and tireless program is a collaboration between Hyundai Motor Company Australia and its 170-strong National Dealer Network, with funds being raised for Hyundai Help for Kids every time Hyundai sells a vehicle in Australia.

You too can support these wonderful initiatives here:

Putting the Tucson through its paces.

Top towing tips to get you ready for the weekend.