The availability of green hydrogen to power vehicles has taken another step forward with Hyundai, Coregas and Jemena coming together to accelerate the uptake of clean transport fuels in Australia. 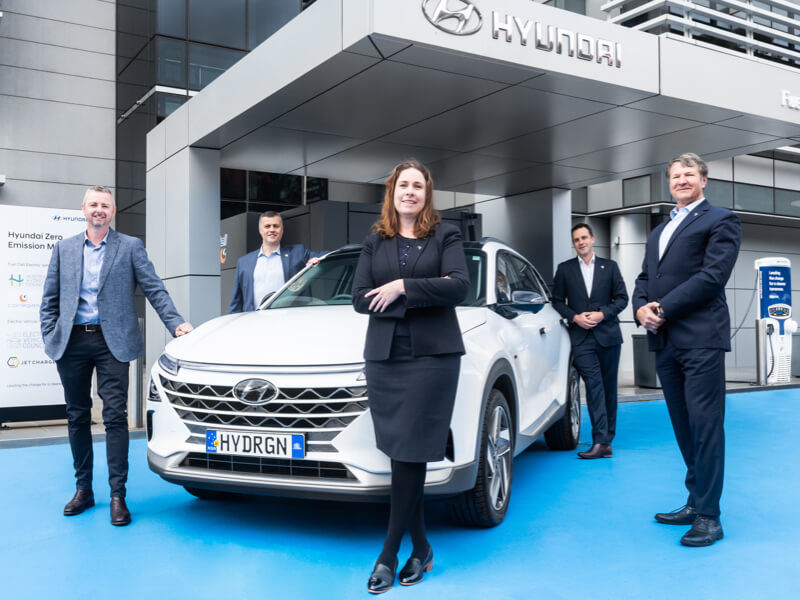 Hyundai has been diligently working towards the day when hydrogen-powered vehicles become a mainstay of Australia’s transport line-up since 2015 when we unveiled our hydrogen refuelling station at our Sydney headquarters and imported the first hydrogen fuel cell vehicle, the ix35.

Hyundai, along with energy infrastructure company, Jemena and speciality gas supplier, Coregas signed a Memorandum of Understanding (MoU) that will see the production and delivery of hydrogen to our Macquarie Park station from early 2021 for use in our refuelling station.

The MoU follows formal certification from the Australian Government for our hydrogen-powered fuel cell electric vehicle (FCEV), the NEXO.

The NEXO is the first FCEV to receive all official clearances required for use on Australian roads including a 5 star ANCAP rating meaning fleets can get behind the wheel of a hydrogen car today.

What’s holding back these zero emission vehicles from getting in the hands of fleets, however, is a lack of hydrogen refuelling stations.

Through the deal, Hyundai and its partners will demonstrate how hydrogen can be produced from renewable energy and made directly available for use in refuelling stations.

By developing this supply chain, the project will show that generating fuel from wind and solar is possible, and we hope, encourage other organisations committed to transitioning to zero emission vehicles to replicate it across Australia.

We are already seeing a number of refuelling station projects underway across Australia with three currently in construction in Brisbane, Canberra and Melbourne.

These stations will be followed by a pipeline of 22 based on current announcements, including 17 announced by hydrogen project developer, Infinite Blue Energy in July to be situated along Australia’s East coast.

Hyundai is working with fleets across Australia to supply vehicles in locations where a hydrogen refuelling station will be present. The leading examples of this are the ACT and Queensland Governments to whom we will provide 20 and 5 units of the NEXO respectively once their stations are operational.

We are also working with a range of other stakeholders to get more FCEVs into fleets in recognition that hydrogen with its range and refuelling benefits is highly suitable to this customer group.

We’re buoyed by the growing momentum for hydrogen, with all Australian states and territories having a hydrogen strategy in place or one under development we and believe it’s now inevitable that we will start to see more hydrogen refuelling stations being realised.

Our deal with Jemena and Coregas is one of many small steps Hyundai is taking to accelerate the use of hydrogen-powered transport for fleets in Australia. We look forward to sharing more over the coming years as we work with fleets on their decarbonisation journey.