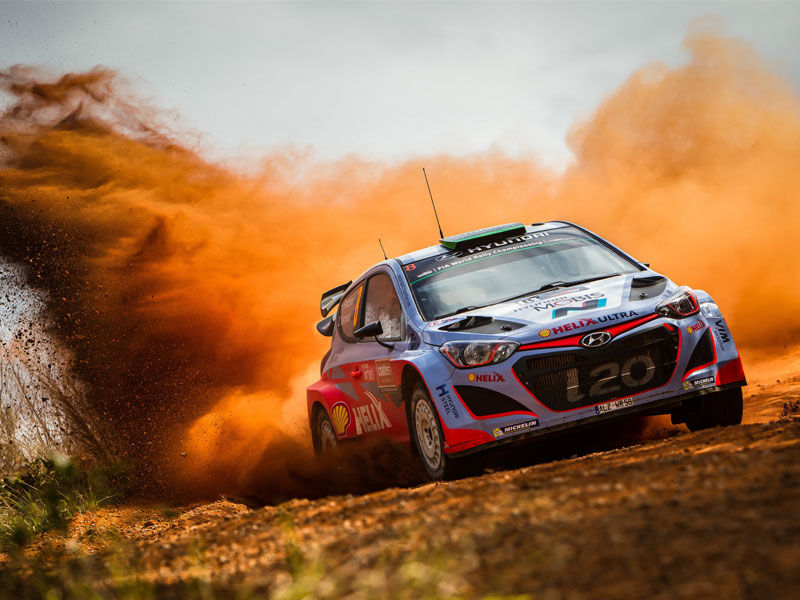 Hyundai Motorsport will be aiming to extend its run of podium finishes to five consecutive rallies this weekend, as Rally Australia brings the 2016 FIA World Rally Championship (WRC) to its conclusion.

The team confirmed its second place in the Manufacturers’ Championship at Rally Wales GB, but there is still all to play for in Drivers’ Championship. 24 points separate second from fifth position heading into Rally Australia with all three of Hyundai Motorsport’s drivers still in with a mathematical chance of claiming the runner-up spot.

2016 has been Hyundai Motorsport’s most successful season in its short WRC history with two victories (Argentina and Sardinia) and nine additional podiums so far. However, the team has yet to finish on the podium in Australia, so that will be its primary target next weekend.

Three New Generation i20 WRCs will take to the Australian gravel for the car’s final WRC event ahead of new technical regulations being introduced for 2017. Thierry Neuville will once again take to the #3 car but will be joined in the Hyundai Shell World Rally Team line-up by Hayden Paddon in the #4 car. Dani Sordo will represent the Hyundai Mobis World Rally Team in the #20 entry.

Once again, Coffs Harbour will play host to Australian round of the Championship. A firm favourite among fans and competitors, it moves to a new position as season finale for 2016, having been held in September in recent years.

Contested over a mix of hard base roads, which vary from the tight and twisty to the fast and flowing, Rally Australia consists of 23 stages totalling 312.98km.

After a run of four consecutive podiums alongside his co-driver Nicolas Gilsoul, Neuville (#3 New Generation i20 WRC) has moved into second place in the drivers’ classification. Currently on 143 points, fourteen points ahead of his nearest rival Andreas Mikkelsen, a strong showing in Australia will be enough to equal his career-best Championship finish - and his best since joining Hyundai Motorsport.

Neuville commented: “We all love coming to Australia and it will of course be extra special this year as it is the last rally event on the calendar. Compared to Wales, the conditions will be very different. The gravel here can be a bit more abrasive and the temperatures will be much higher, so it will be a completely different challenge for both us and the car. It’s great to come here in the fight for second place. Both Nicolas and I are really looking forward to trying to finish the season on a high note!”

Finishing just twelve seconds behind their Belgian teammates in Wales, Paddon (#4 New Generation i20 WRC) and co-driver John Kennard are also hopeful that they can finish their season with a strong showing Down Under.

Paddon said: “Australia a special rally for us as it’s as close as it gets to being at home. We’re really looking forward to having a lot of Kiwis and maybe even a couple of Aussies supporting us. We’re in a really great position overall and I’m sure we can end the season on a real high. We’re going to be pushing really hard. I really enjoy the stages and the surface. We want to put ourselves in position to fight for the win. We want to put on the biggest show that we possibly can and give it our best shot.”

Sordo (#20 New Generation i20 WRC) and compatriot co-driver Marc Martí will also be targeting a podium finish, as they look to finish the season with a third top-three finish. After a tough event in Wales, the Spanish duo will want to replicate the sort of performance that saw them challenging at the front in Spain last month.

Sordo commented: “I am very excited to be coming to Australia again. It is a really nice area for rallying and a great place to finish the Championship. We had a difficult rally in Wales and we couldn’t manage to get the best out of the car or ourselves. We want to bounce back that’s for sure. I know what we are capable of on gravel with this car. As it is the last race, we will of course try to get the best possible result and end the season on a positive note. We are involved in a close battle in the Drivers’ Championship, too, so it will be an exciting season finale.”

Hyundai Motorsport has finished on the podium in all but three events so far this season, securing the team its best ever Championship finish in second place. Australia will see the final round for the competitive New Generation i20 WRC as the team will compete in the 2017 season with a brand new car to meet the WRC’s revised technical regulations.

Team Principal Michel Nandan said: “It’s hard to comprehend that we are already at the end of the 2016 season, but there’s definitely a lot still to fight for. We were delighted to secure our second place in the Manufacturers’ Championship after Wales Rally GB, but now the attention turns to the drivers’ battle. It’s impressive to see all three of our drivers still involved in this close fight for second place. They will no doubt be pushing hard in Australia to come out on top and our job is to provide them with the car to get their best result possible. The fact we’ve never finished on the podium in Australia gives us extra motivation to do well. It would be nice to end the season on a high, particularly in our last event with the New Generation i20 WRC that has served us so well this season.”

Rally Australia action gets underway on Friday with familiar stage names such as Utungun (7.88km), Bakers Creek (16.75km) and Newry (25.30km). Saturday will see the greatest distance covered, with 135.19km of stages, including two runs of the daunting 50.80km Nambucca, one of the longest stages of the season. Sunday will see the action head north of Coffs Harbour and will include two runs of the popular Wedding Bells (6.44km) stage, the second of which will serve as the rally’s Power Stage - and the final stage of the 2016 Championship.