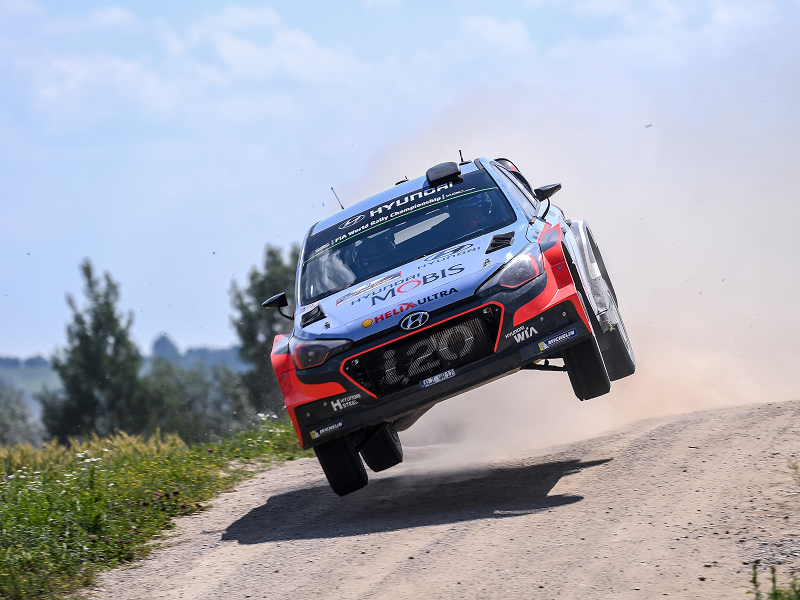 Hyundai Motorsport has added a fifth podium to its 2016 tally after a competitive showing for the team in Rally Poland, round 7 of the 2016 FIA World Rally Championship (WRC).

Wet, slippery conditions made for a thrilling final morning as drivers negotiated two runs of the 21.25km Baranowo and 8.55km Sady stages. There was disappointment for Dani Sordo as the Spaniard retired from a top-ten position on the penultimate stage after hitting a bank. Neuville, however, finished the event with a flourish; the Belgian took third in the Sady Power Stage, to pick up an additional championship point.

At the season’s halfway point, with seven WRC rounds still to contest, the Hyundai Motorsport team holds second in the manufacturers’ standings with 135 points after adding 27 points today. Paddon moves up to third in the drivers’ classification with Sordo and Neuville inside the top-six.

For Paddon (#4 New Generation i20 WRC) and co-driver John Kennard, today’s result marks a third podium of the 2016 season following second place in Sweden and victory in Argentina. The Kiwi crew navigated the tricky conditions on Sunday morning, fending off a close challenge from Neuville for the third place.

Paddon said: “That was too close for comfort really! I struggled in the conditions this morning. The rain made the stages very slippery and I had no confidence at all. Our objective today was to secure third position rather than push for second, so we wanted to be relaxed. I think we probably eased off too much. Third is a great result, irrespective of how close it was - just 0.8 seconds! I am happy with the way the weekend has gone. We’ve had a good rally here in Poland and it’s allowed us to bounce back after two tough results. It’s fantastic to be on the podium again and I hope we can do the same in Finland. Congratulations to everyone in the team on a job well done.”

Neuville (#3 New Generation i20 WRC) established himself as a strong podium contender this weekend. The Belgian and co-driver Nicolas Gilsoul were left regretting slow pace notes on Friday as they finished the rally within just three seconds of second place. A convincing run in the tricky Power Stage gave the #3 crew a well-earned consolation point.

Neuville said: “That was a tough final morning for everyone, with some demanding, slippery conditions. We were trying to keep things smooth and clean, just to bring the car home safely in the top-four. Our rally was affected by our pace note problems on Friday morning’s loop, which lost us valuable time. It was always going to be challenging to regain that time but we did our best. I think apart from that we had the perfect weekend and the New Generation i20 WRC performed well. Finishing third and fourth gives the team a nice points haul, and it was definitely a bonus to pick up a Power Stage point. We can look to Finland in optimistic mood, confident that we can challenge on fast stages.”

Sordo (#20 New Generation i20 WRC) had looked on course for a top-ten finish until the complicated conditions on SS20 (Baranowo) caught out the Spaniard. Contact with a bank caused terminal damage to the rear suspension of his car, and he was forced to retire from the rally - his first non-finish of the season.

Sordo commented: “It has not been a great weekend for me. It’s disappointing to get my first retirement of the season so close to the end of the rally. We just had no luck today. The opening stage was fine but in the second one (Sady 1) we hit the hay bales in the chicane, which caused some damage to the front of the car. The mechanics did a fantastic job to get me back for the second loop, but the heavy rain made conditions really difficult. I touched a bank about 3km into the repeat Baranowo stage and the contact damaged parts of the rear suspension. We wanted to make sure that we didn’t slow any of the cars behind us. We took the decision to return to the service park at slow speed to avoid causing any further damage to the car. A weekend to forget but we still enjoyed many of the stages. It’s great for the team to get another podium and some important points in a tough rally.”

Paddon’s third place gives Hyundai Motorsport its second ever Rally Poland podium, following a top-three for Neuville back in 2014. The New Generation i20 WRC showed its pace with four stage wins over the weekend. The car has now taken two victories, one second and two third places in seven rallies, while all four of the team’s driver crews have taken Power Stage points so far this season.

Team Principal Michel Nandan commented: “That was an intense final morning so I am delighted that we have secured our third and fourth with Hayden and Thierry. The conditions were some of the most difficult we’ve seen this season so it was a relief to confirm our positions. As a team, we have had a good weekend, taking our second Polish podium. It was never going to be an easy rally but the car, team, drivers and co-drivers performed well. It’s good to see Hayden return to the top-three and for Thierry to finish strongly with a Power Stage point. Unfortunately, Dani was caught out on the penultimate stage. The impact with the bank caused significant damaged to his car, so he was forced to end the rally having moved into the top-ten. As always, there are lessons to learn from the pressurised WRC competition, but we are reassured by the performance of the New Generation i20 WRC on the fast stages here in Poland. We can look forward to another high-speed test in Finland later this month.”