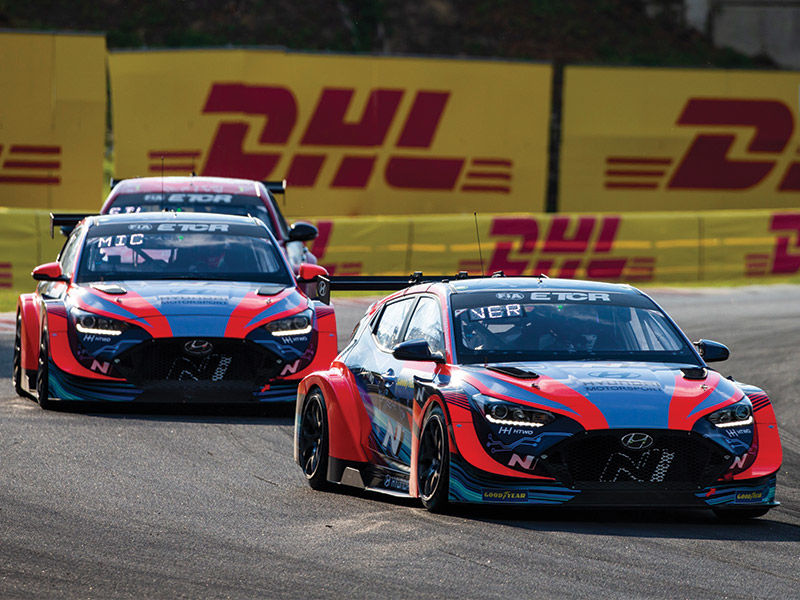 Hyundai Motorsport N demonstrated a competitive performance at the Race HU, the second round of the FIA ETCR - eTouring Car World Cup, this weekend (June 10-12).

The team was able to fight at the front of the field at the Hungaroring with the Hyundai Veloster N ETCR - a vast improvement at a circuit where it struggled with speed in the inaugural PURE ETCR season less than 12 months ago.

After setting competitive times in Qualifying, both Mikel Azcona and Kevin Ceccon secured positions in Pool Fast’s Quarter Final 1. The Spaniard was able to successfully overtake the Cupra of Mattias Ekström, but lost the victory in the final two corners of the Quarter Final after a small mistake. He came back fighting in Sunday’s Semi Final, making a great start to battle with Ekström once more. After going door-to-door for two laps, Azcona then had to see off another challenge before he could claim victory, which secured him pole position for the Super Final. His promising weekend ended in bitter disappointment, after a bad start saw him fall down the order to fifth. He could only recover to fourth by the chequered flag, but moves up to third in the overall driver’s standings.

Ceccon attacked hard into the first corner of the Quarter Final, but went wide to allow Azcona to vie for the lead of the race and he finished in third. This meant the Italian started Semi Final 2 on pole position; he was running door-to-door heading into the hairpin, but had to concede position at the next corner. Ceccon kept within touching distance of the lead of the race for the remaining laps, but a late move from Jordi Gené saw pipped to second place on the start/finish straight, and he crossed the line in third. He started the Super Final in sixth place and gained a position on the opening lap, claiming a fifth-place finish to end his weekend./p>

Thierry Neuville and Martijn Wydaeghe returned on the final day after a frustrating weekend which was hampered by a transmission issue on Friday. The Belgians went out fighting with their second fastest time of the weekend in SS19, and a big push in SS21 to take maximum Power Stage points. It was a fitting way for Neuville to claim his 300th career stage win.

In Pool Furious, Jean-Karl Vernay was disappointed not to qualify for Quarter Final 1, having set a competitive time within touching distance of the top-two positions. Starting from pole, he moved into the lead of the race and took a comfortable victory, securing the final slot on the Semi Final 1 grid. On Sunday morning, a problem for the Cupra off the line allowed Vernay to move into second place and challenge for first. Although he managed to pass the Romeo Ferraris car on the final lap, they made contact in the closing stages of the race, resulting in Vernay being pushed off the track. He managed to get his Hyundai Veloster N ETCR moving again to cross the line in third place. In the Super Final, the Frenchman battled to defend against a charging pack throughout the race. It came to an early end when he touched another car, causing a rim to break and Vernay to spin.

His team-mate Norbert Michelisz had an eventful Quarter Final, as he used his Power Up boost to move up into second place at the end of the first lap. The Hungarian managed to hold up the chasing car behind until the final lap, and he had to settle for third. In his Semi Final, a small mistake cost him time and increased the gap to the cars ahead, forcing Michelisz to use his boost to catch the back of the pack. Starting from the back of the grid in the Super Final, the home hero attempted to use his Power Up strategically to enable him to progress. He gained two positions following Vernay’s incident, but was unable to move any further before the end of the race and he finished in fourth.

Mikel Azcona said: “It’s been a positive weekend at the Race HU. Compared to last year, the performance of the Hyundai Veloster N ETCR is greatly improved at this circuit and we have been able to fight for the top positions. This is incredibly positive as we head to Jarama next week. Qualifying was very good for us, we were close to getting pole position but I was disappointed I lost some time with a mistake on one of my laps. There were some intense battles in the Quarter Final and it was fantastic to win the Semi Final against two top drivers. Unfortunately, I struggled in the hot conditions of the Super Final and I couldn’t recover more than fourth, but overall the car has been very competitive. We will do our best in Race SP to continue this trajectory and move forward in the title standings.”

Jean-Karl Vernay said:“Overall, our performance in Hungary was a huge improvement compared to last season. This is a great positive to take into the next race weekend. Last year we really struggled here and this time, we were only three-tenths off of pole position in Qualifying for Pool Furious. I was quite happy with my lap, even if we were fourth overall. I tried to fight as hard as I could in the races and I had some good battles. I needed to win my Quarter Final to ensure I would start in the top three in the Super Final, which was exactly what I did. It was unfortunate to retire from the Super Final, but now I’m focusing on being King of the Weekend at the Race SP. We have some work to do but we made some good progress.”

Norbert Michelisz said: “It was quite an exciting race weekend for me, and I felt I learned a lot during each session. I was faster and stronger in the Hyundai Veloster N ETCR than I was last time out in Race FR. The Super Final was probably my best session yet; I tried to be strategic and save my Power Up to be able to push later in the race. Just as I started to put pressure on the car in front there was an accident. After that, I tried to close the gap to third, but I was just a bit too far away to make a move. In the end, it was still a good result. I finished every session, scored important points, and my confidence is increasing weekend by weekend. I hope we can carry this momentum into Race SP.”

Kevin Ceccon said: “The Race HU started off with a great Qualifying. The pace in the Quarter Final was not good enough to fight to improve on my third position. In the Semi Final it was a shame we could not do more with my pole position as I had an average standing start; we also saw others struggle when starting on the inside gate. Apart from that, it has been a great weekend. I was very comfortable with the Hyundai Veloster N ETCR and I was able to show some good pace.”

“This weekend has been a remarkable improvement compared to our last visit to the Hungaroring with PURE ETCR. Each of our Hyundai Veloster N ETCR drivers were able to fight at the front and apply pressure to the cars around them, and we are particularly pleased with our performance in Qualifying. It is disappointing that our results don’t fully reflect this positive progression, but we will look to continue this drive forwards next weekend at the Circuito del Jarama. The title fights remain close and the season is long, but our target has to claiming our first King and Manufacturer of the Weekend of the year.”
- Hyundai Motorsport Director of Marketing and PR, Stefan Ph. Henrich said

2022 FIA ETCR Manufacturers' Standings (after round 2)