All-new i20 N prototype revealed for the first time in winter testing.

Hyundai Motor has released two new videos showing winter testing for its high-performance models, including a prototype of the all-new i20 N in camouflage. The videos, which were shot in Arjeplog, Sweden, show Hyundai WRC driver Thierry Neuville putting the i20 WRC, the RM19, and the i20 N through their paces in a snowy landscape. In addition, first images of the all-new i20 N have been released.

The first video shows the i20 WRC rally car departing from a vehicle transporter and driving through darkened roads in Lapland, bonnet-mounted headlamps lighting its way. As dawn breaks, it picks up speed, driving through snow-covered forests and around hairpin curves to reach its real playground: a frozen lake. The only sound is the revving of the engine as the car tears across the tundra on a bright Arctic day.

The video cuts to the RM19, skidding sideways along the road and leaving a plume of snow in its wake. In an interior shot, the viewer sees Neuville pumping the pedals and expertly maneuvering the prototype known as Hyundai’s “rolling lab”. The car draws sweeping curves across the snow.

The camera cuts again, and this time we see a prototype of the all-new i20 N, with camouflage covering over its front and rear. The viewer gets just partial glimpses of the new model’s details, as it drives across the snow.

On the prototype all-new i20 N, Neuville said: “Very interesting car. Very precise. Very easy handling. The engine is revving nicely and the noise is very interesting as well. I’m looking forward to get this one to drive in WRC!”

Of the i20 WRC, Neuville says: “The WRC cars really push to the extreme. And every detail is fine tuned to get the maximum performance and also to be adapted to a driving style.”

He describes the RM19 as “very easy to drive.” Speaking of the test drive, he says “I had a big smile on my face because I was driving sideways quite a lot.”

The testing took place earlier this year on a frozen lake in Arjeplog, Sweden, a popular winter testing ground for automotive manufacturers. The year-round deep cold makes it the perfect place for testing vehicles in extreme weather conditions. Some days, the temperature can drop to minus 30 degrees Celsius.

Hyundai tests its cars in harsh climates to make sure its vehicles can still perform in extreme weather conditions. From searing summer heat to icy winter roads, vehicles must be able to function in every climate condition in Europe.

In this test, Hyundai wanted to evaluate the reliability of the vehicles under extreme cold, as well as test their performance in motorsport-like conditions. The high speeds and sharp turns put the vehicles under a high amount of mechanical stress, proving their capabilities in tough conditions.

Following the success of the i30 N and i30 Fastback N, Hyundai is developing a high performance version of its newest European model – the all-new i20 N. As with other N models, the i20 N will be racetrack capable and street legal.

More details of the i20 N will be revealed soon. 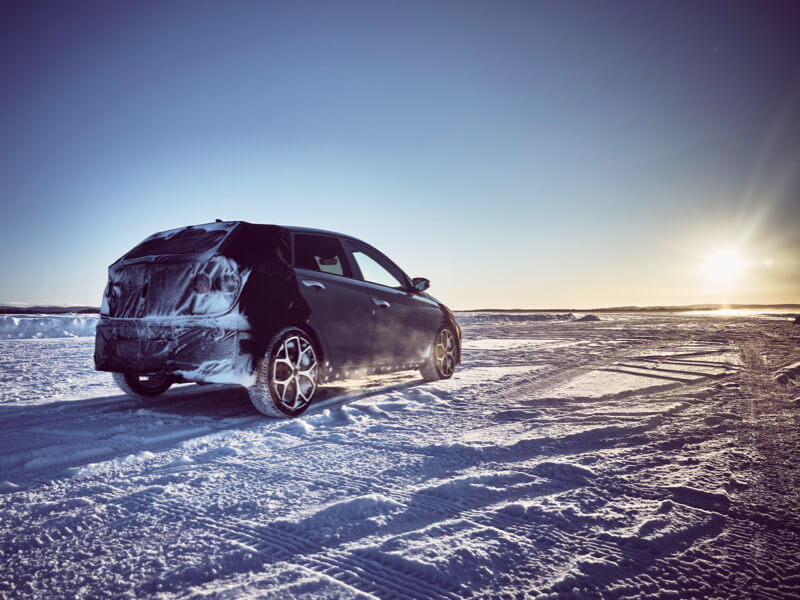 In 2012, Hyundai established its Hyundai Motorsport division and signed Belgian rally driver Thierry Neuville as its lead driver. In 2014, the team began its first season in the WRC with its i20 WRC car. That year, Neuville scored his and Hyundai’s first WRC victory at Rally Deutschland. Overall, Neuville has achieved nine wins, 26 podiums and 129 stage wins driving for Hyundai. And in 2019, he once again led the team to victory as Hyundai Motorsport won its first WRC manufacturer’s title.

In addition to its racing production cars, Hyundai Motorsport is also testing out new technologies on a series of high-performance concept cars, called Racing Midship, or RM for short. RM serves as a test bed or rolling lab to develop and test new ideas. The most recent concept, the RM19, features a 2.0-litre turbocharged rear-axle-mounted engine, a large rear spoiler, and 287kW.

Beyond rallying, Hyundai has also made a foray into touring as well. In 2017, Hyundai competed for the first time with its i30 N TCR. Since then, Hyundai has developed two successor touring cars: the Veloster N TCR and the all-electric Veloster N ETCR.

Racing cars developed for motorsport serve as an inspiration for the N line-up, Hyundai’s high-performance production-car range with racetrack capabilities.

Driving into the future with Australia’s electric highways.