Hyundai Motorsport is looking to continue the positive start to the FIA World Rally Championship (WRC) season as the team takes on Rally Argentina, the fourth event of the 2016 season.

The New Generation i20 WRC has already demonstrated its competitiveness in each of the three rounds of the Championship so far - in Monte-Carlo, Sweden and Mexico - and the team will now target its first-ever podium in Argentina.

Hyundai Motorsport will touch down in Villa Carlos Paz with considerable momentum after claiming its first back-to-back podium finishes in WRC with Thierry Neuville taking third in Monte-Carlo and Hayden Paddon finishing second in Sweden. This pair of podiums was then followed by Dani Sordo's fourth place in Rally Mexico - a combination of results that makes for the team's strongest start since it entered WRC in 2014.

Rally Argentina is a challenging event - Neuville and Sordo's best results are both fifth-place finishes, achieved in 2014 and 2015 respectively. Neuville and co-driver Nicolas Gilsoul will this year take to the #3 New Generation i20 WRC with Sordo and Marc Martí in the #4 car, both crews competing under the Hyundai Shell World Rally Team banner.

Paddon and co-driver John Kennard have only driven Argentina once before with Hyundai Motorsport and will line up in the #20 car for the Hyundai Mobis World Rally Team. The Kiwi pair will use this year's running to gain more valuable experience.

Rally Argentina was first held in 1980 but settled into its current home of Villa Carlos Paz, situated 700km out of Buenos Aires, in 1984 after a short stint in the Bariloche region of southern Argentina.

Drivers will use gravel suspension on the Argentinian stages that range from the softer valley roads of Santa Rosa de Calamuchita to the harsh and rocky lunar mountain roads of Traslasierra. Roads may become heavily rutted by the second pass and drivers will raise their ride height to deal with the tyre-tracks that can potentially push a car from the road. They will face further obstacles in the form of watercourse crossings in the rally's valley sections and the risk of fog along its mountainous stretches.

With testing prohibited outside of Europe, the team carried out a four-day test in northern Portugal at the start of April in order to prepare for Rally Argentina. Work concentrated on set-up work and reliability tests in conditions similar to those that will be encountered next weekend. 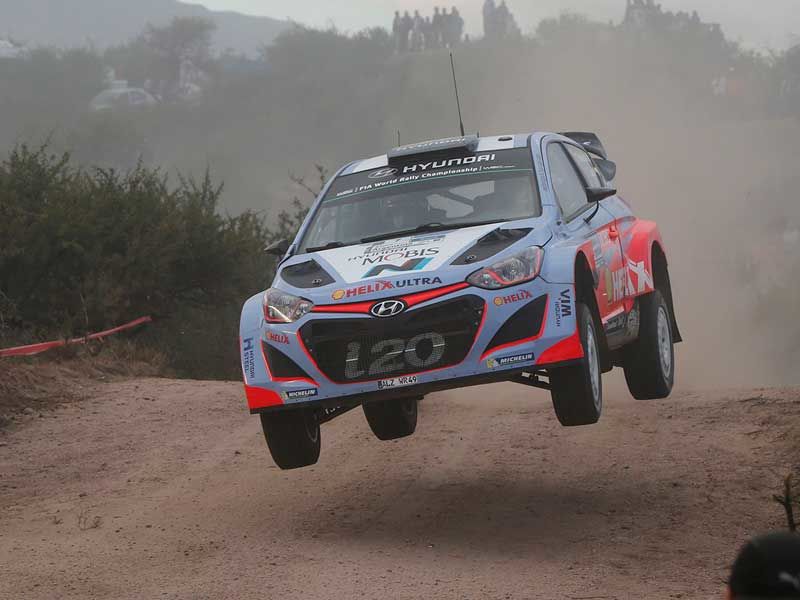 Team Principal Michel Nandan said:
"We head to Argentina with a lot of momentum after our performances at the first three rallies of the year. We have two podiums and a fourth-place finish in those three events, so it is our best start to a year of WRC competition - we want to keep this going! Rally Argentina is a tough event that is well known for how hard it is on the cars as well as the drivers, so it will be a good test for our New Generation i20 WRC. The new car has already proven itself on the gravel of Mexico but Argentina is a different beast and we will approach it with all of the experience our team has gained in previous years at the event. There are some new roads featured in this year's stages and this should level the playing field, allowing us to really assess the New Generation i20 WRC against our competitors. The whole team is very motivated to maintain our strong start to the season."

Neuville commented:
"Rally Argentina is a very tricky event – we have seen very rough conditions here in previous seasons and this year will be the same. It's going to be hard for everybody, but especially on the cars. The rally will be very long and there are some new stages so there will be different challenges. I am excited to get back on track after an early end to my rally in Mexico. I look forward to continuing to push the New Generation i20 WRC that has performed well so far this year. To achieve a podium finish in Argentina is the ultimate goal for the team and I will push for it but it's also important to adopt a cautious approach."

Sordo (#4 New Generation i20 WRC) took fifth at Argentina in 2015 after a strong run with one stage win and four second-place stage finishes. He has built up his 2016 rhythm with two top-six finishes and a fourth place in Mexico. The Spaniard is keen to claim his first podium of the season.

Sordo said:
"Rally Argentina is a fantastic rally, one that I like very much because of the stages, the atmosphere and of course the event itself. I also like it for its location in South America - it's always good to go back there. The stages are enjoyable but there are a lot of stones in the road so it can be difficult for the car. In that sense, I think it is one of the hardest rallies in the Championship for the cars, but the New Generation i20 WRC has been performing well so I have confidence in it. There will be some changes in my approach from Mexico to Argentina, as the roads are completely different - in Argentina the roads are much softer and not as abrasive on the tyres. I will be looking to improve on my position from last year by driving consistently and hope to achieve my first podium of 2016."

Paddon commented:
"Argentina is one of my favourite rallies of the year, simply because of the atmosphere that comes from the amount of people that are there and enjoying the rally. It is, however, a very difficult event with its own set of challenges - it's definitely one of the roughest rallies of the year so you have to adopt a slightly different mentality to make sure you look after the car as well. I have driven here twice before, once for Hyundai Motorsport and once in 2011, when I won the PWRC round. I'm looking forward to taking on the stages again. The whole team has been running very well so far this year and it will be great to add to that by gaining more experience in Argentina."

Rally Argentina will cover 364.68km over 18 stages with the service park based in Villa Carlos Paz. Thursday evening's new Cordoba street test (1.50km) will launch the rally before Friday takes drivers south along the sandy valley roads of Calamuchita. This day will feature two runs of Soconcho (24.71km), Amboy (20.44km) and Santa Rosa (23.85km) across the morning and afternoon, a busy first day topped off by two Super Special Stage runs of Parque Tematico (6.04km). Many of the Calamuchita valley roads will see their first use in WRC in several years, a trend that continues into the next day of rallying.

Saturday's itinerary has been significantly tweaked due to the unsuitability of the stages originally selected by the event organisers. As a result, the action will be centred closer to Villa Carlos Paz with the road section distance reduced.

The final day of rallying on Sunday will see drivers climb the moonlike, rocky mountain stretches of Traslasierra on the Mina Clavero - Giulio Cesare (22.64km) and legendary El Cóndor (16.32km), which drivers will return to for a second run as the rally's Power Stage.