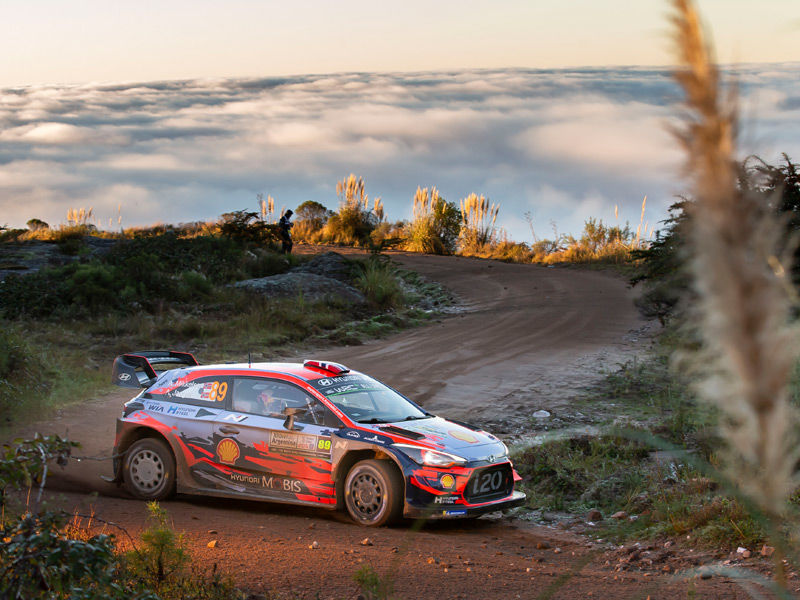 Hyundai Motorsport has secured its second consecutive victory of the 2019 FIA World Rally Championship (WRC) as Thierry Neuville triumphed in Rally Argentina ahead of Andreas Mikkelsen.

The Belgian and his co-driver Nicolas Gilsoul took the win by 48.4-seconds with a calm and collected performance on the final morning of the rally. Norwegian duo Mikkelsen and Anders Jæger-Amland took their best result to date as a Hyundai Motorsport crew with a strong run to second place, their first podium finish since Rally Sweden 2018.

Completing a competitive weekend for the team, Dani Sordo and Carlos del Barrio took the #6 Hyundai i20 Coupe WRC to sixth place overall.

Rally Argentina has offered plenty of drama and challenging conditions over the entire event. Sunday morning’s itinerary covered two of the most demanding and iconic stages of the season, with two runs through El Condor (16.43km) and a solitary attempt at Mina Clavero-Giulio Cesare (20.30km).

The second pass of El Condor acted as the Power Stage. Neuville finished the rally with a flourish, taking three extra points for the third fastest time, despite taking a cautious approach, and Sordo taking two additional points for his personal total.

Securing maximum manufacturer points for the 1-2 finish, Hyundai Motorsport has strengthened its position at the top of the championship on 157 points, 37 clear of its nearest challengers Toyota. Neuville, meanwhile, has also extended his lead in the drivers’ classification to ten points ahead of Sébastien Ogier. 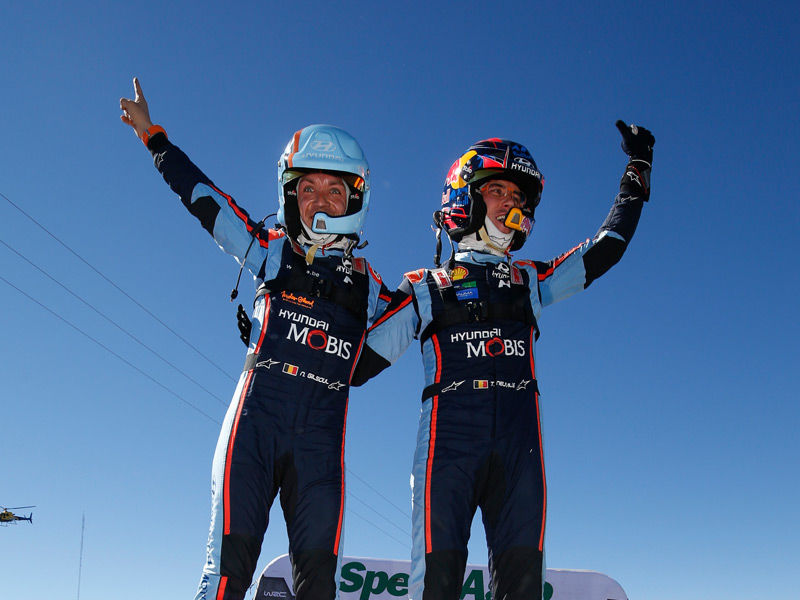 • Second consecutive win of 2019, and second Rally Argentina victory for the Belgian crew
• Leads drivers’ championship by ten points over Sébastien Ogier
Neuville said: “This is a really great feeling! The car has been absolutely perfect all weekend and I have felt comfortable, quick and in control throughout the event. We have taken some strong stage wins and shown the performance of our i20 Coupe WRC in some very challenging conditions. It has been an amazing team result, not only at the rally, but also everyone working tirelessly in Germany. I am so thankful to everyone for their hard work, dedication and professionalism. We have scored some important points for the championship and I am really proud of what we have achieved this weekend.”

• Best result as a Hyundai Motorsport crew, beating their third place from Sweden last year
• Second place represents the Norwegian’s first podium of 2019
Mikkelsen said: “It’s been a really tough really so I am overjoyed with this result. We have had to wait a long time for this, and we’ve certainly battled through some frustrating times. It might be second place but it really feels like a victory to me. We have been working so hard and I am incredibly thankful to the team for their support. We found great pace from the car this weekend and finally been able to show what we – and the car – are capable of. To finish 1-2 gives us such important points for the championship, and I couldn’t be happier.”
Crew Notes: Dani Sordo/Carlos del Barrio (#6 Hyundai i20 Coupe WRC)
• Solid performance for the Spaniards to finish inside the top-six
• Confirmed the strength in depth of the Hyundai i20 Coupe WRC in tough conditions
Sordo said: “I am really happy for the team, and pleased that our manufacturers’ position has been strengthened. I really wanted to push for third place today but I just didn’t have the pace that was needed. I have done my best all weekend but ultimately the 1-2 result for Thierry and Andreas gives the team maximum points, which is the most important thing. There are some things I can learn from this weekend personally, and I will aim to return stronger next time.”
Team Director Andrea Adamo: “Thierry and Nicolas have done an amazing job this weekend, as have Andreas and Anders. I am particularly moved by this 1-2 result because I know what we are giving our crews to compete with. They are filling the gap with some incredible performances. This is the most emotional weekend since I have taken over this role because – maybe for some kind of planetary alignment - we have seen huge success for Hyundai in motorsport series across the world. Hyundai Slovenia took a 1-2 in the Slovenia Rally Championship, and we saw an amazing result in the UK with Tom Cave and Jari Huttunen finishing first and third. At the same moment Thierry and Andreas were securing the result in Argentina, Hyundai customers also celebrated a 1-2 in WTCR Race of Hungary with Gabriele Tarquini and Norbert Michelisz. The Hyundai i30 N TCR also proved a dominant force in TCR Europe, also in Hungary. I know I have been demanding a lot from everyone at Hyundai Motorsport, asking them to push hard to make progress. I hope these results pay back each and every one of their efforts. I am an incredibly proud Team Director today.” 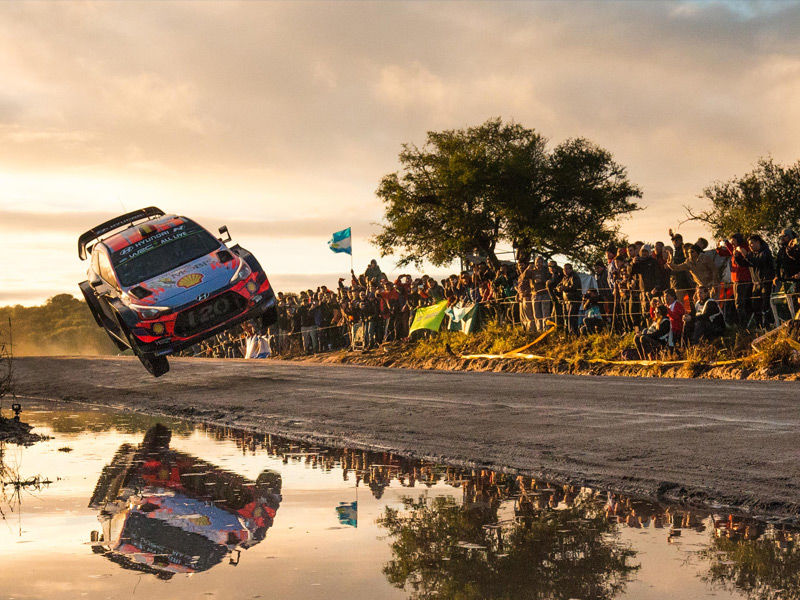 Next Rally
The South American double header continues onto unchartered territory for WRC, as Rally Chile takes place over the weekend of 10-12 May. 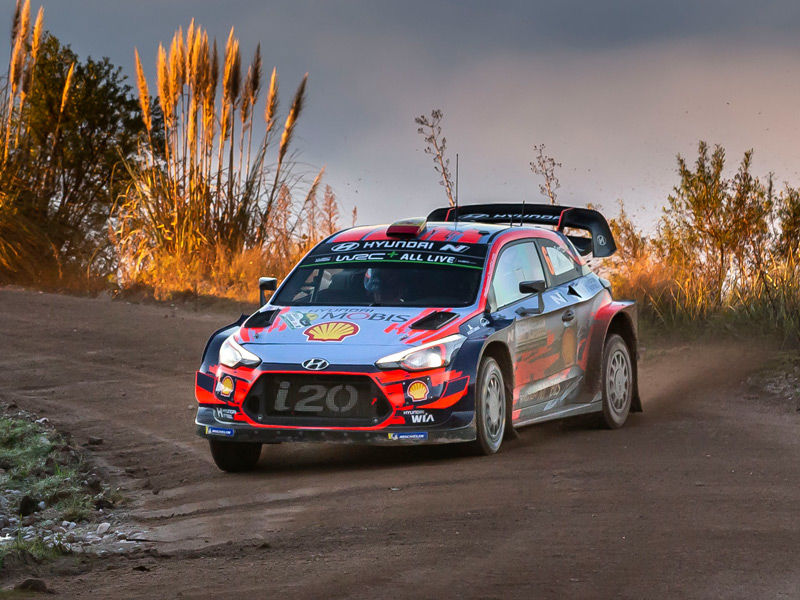 2019 FIA World Rally Championship for Drivers’ Standings (after round 5)

2019 FIA World Rally Championship for Manufacturers’ Standings (after round 5)