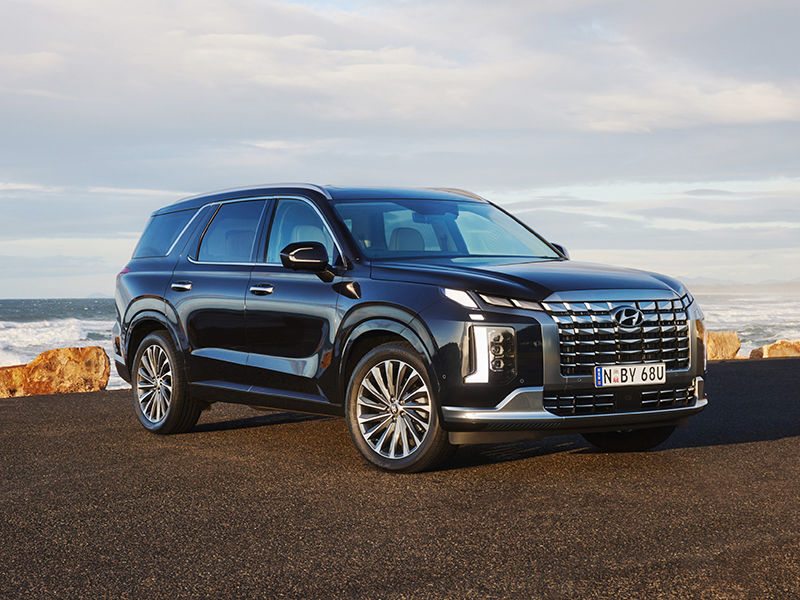 2023 Palisade is here, ushering in a bold new style, with advanced new safety, luxurious features and connectivity technology, including the Australian debut of Hyundai BluelinkTM.

The seven- and eight-seater Hyundai flagship SUV builds on the model’s extensive SmartSense™ suite for 2023 with an array of new and upgraded safety technologies.

Headlining in the luxurious and refined cabin are a futuristic, crisp and responsive 12.3-inch full digital instrument cluster and 12.3-inch touchscreen multimedia system.

The safety, convenience and peace of mind of Hyundai BluelinkTM is also standard in new 2023 Palisade with a complimentary five-year subscription.

Bluelink™ also lets users connect to their Palisade from anywhere via their smartphone, and make sure it’s safe, healthy, and ready to go. They can send planned routes from home to their car, receive emergency assistance automatically after an accident, and find, check and even remotely lock or start their car with their preferred climate settings.

Countless refinements throughout, including a revised eight-speed automatic transmission, the expanded application of sound insulation, and soft open/close electric windows, seal 2023 Palisade as a first-class experience for the whole family to enjoy.

“We are delighted to introduce our premium flagship Palisade in an upgraded and restyled design for 2023,” Hyundai Motor Company Australia Chief Executive Officer, Ted Lee said.

“2023 Palisade builds on its family SUV credentials with additional safety, luxury, convenience and connectivity features, including the first application of Hyundai BluelinkTM connected car technology, to create an immensely appealing package,” he said.

2023 Palisade is available in two trim grades - Elite and Highlander - to ensure customers can access a tech-focused SUV in a package perfectly matched to their needs and lifestyle.

Each trim grade is available with a choice of a 3.8-litre GDi petrol V6 with two-wheel drive or a 2.2-litre CRDi turbo-diesel with HTRAC all-wheel drive, both teamed with an eight-speed automatic transmission.

In addition, Palisade can be optioned with either a 7-seat or 8-seat layout, the former offering two individual captain-style chairs in the middle row as a no-cost option. 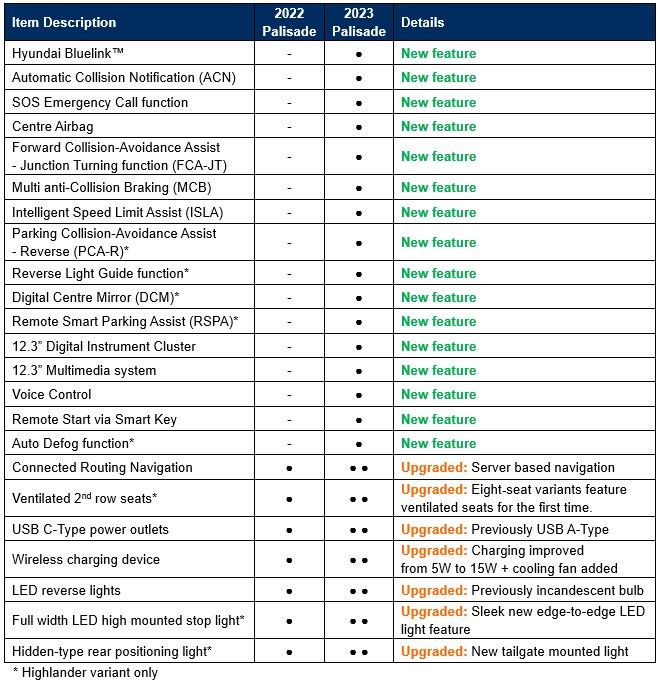 2023 Palisade is available in a choice of nine exterior colours including the standard Creamy White mica and the optional premium Graphite Grey metallic and Sierra Burgundy, Moonlight Blue and Abyss Black mica.

A new four-spoke steering wheel features, with a Highlander-exclusive two-tone finish, and there is a full-width centre air vent.

Safety and security are enhanced with the addition of a front centre side airbag and a Bluelink™ SOS emergency call button.

Additional luxuries for Highlander variants include heated and ventilated front and second-row seats now for both seven- and eight-seat variants, and wing-out aircraft-inspired second-row headrests.

2023 Palisade’s chassis structure is updated and reinforced to improve body rigidity and safety. Collision performance is improved through the reinforcement of the side impact structure in key areas such as the side sill, floor and B pillar. By reinforcing the side and floor structures, occupants are better protected in the event of a collision.

2023 Palisade delivers enhanced ride and handling through retuned suspension that applies new, third-generation Selective Damping Control technology (SDC3). SDC3 implements a floating portion of the valving in the dampers and can adjust the oil flow rate depending on the input frequency.

“The new damper technology that’s been implemented in the 2023 Palisade has been designed to improve both the ride and handling,” Hyundai Product Development Manager Tim Rodgers said.

“What this means in practice is that, in terms of damping control, high frequency wheel motions, say, over corrugations, can be managed separately to larger body motions.

“When these two damper frequency inputs are split, it allows you to fine tune the control of each separately to deliver an overall more refined driving experience,” he said.

“Way back, when Palisade was first confirmed for RHD, the tuning team at Namyang R&D Centre were keen to get Hyundai Australia Engineering involved at a very early stage. We have been in constant communication ever since, provided feedback and recommendations to assist with the global tuning direction,” Rodgers said.

“For 2023 Palisade we’ve applied the same principles and practices, but now with the benefit of more sophisticated dampers.

“We conducted extensive validation testing locally to ensure it works for our conditions and we were extremely happy with the results,” he said.

New 2023 Palisade’s NVH performance has been further upgraded by significantly increasing the application of insulation materials.

This includes a noise-reducing cover around the upper cavity of the subwoofer and rear wheel arches and increasing the thickness of the insulation pad around the wheel guards, speakers, luggage side trims and bumpers to improve sound absorption.

2023 Palisade’s rear door glass has also been thickened by nine percent, further reducing sound transmission. Wind noise has been reduced with the addition of an insulation pad to reduce wind leakage around the side mirror base mounting points.

In addition, the horisontal exterior door glass seals have an increased overlap where they meet the glass runner with an enlarged sealing overlap, improved flocking material and an enlarged end joint, all contributing to a further reduction in wind noise.

For 2023, Palisade’s Multi-Terrain Control system has been revised with improved Traction Control System (TCS) operation when selecting each of the off-road Terrain modes.

A revised Terrain Mode logic has been applied to aid off-road escape performance by improving the excess driving force braking control. This improvement has been implemented by optimising the estimated driving force and wheel friction coefficient when wheel spin occurs during off-road driving.


New 2023 Palisade builds on an already comprehensive suite of advanced active safety and driver assistance technologies with an array of new and upgraded SmartSense™ features, to deliver a 5-star ANCAP rating.

There are seven airbags in 2023 Palisade, with the addition of a front centre side airbag. Mounted in the left side of the driver’s seat backrest, it can prevent or reduce the severity of injuries caused by collisions between the front occupants, or collisions between occupants and interior components, in the event of a side impact collision.

2023 Palisade comes standard with a full suite of Hyundai SmartSense™ safety technologies, including:

The new Multi anti-Collision Brake (MCB) function controls the vehicle braking automatically in the event of a collision that causes an airbag or seatbelt pre-tensioner to deploy, to reduce the risk of a subsequent collision.

Blind-Spot Collision-Avoidance Assist (BCA) has been revised in the following areas for 2023 Palisade: 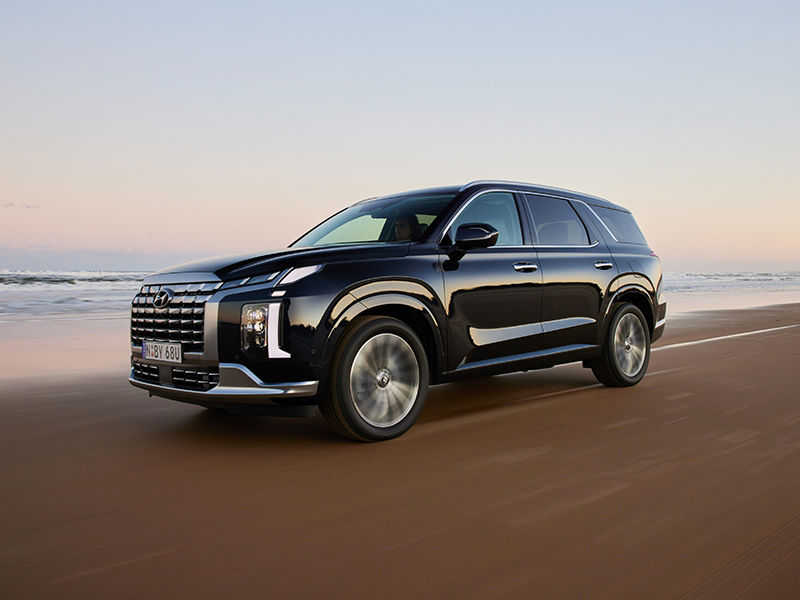 An upgraded Head-Up Display (HUD) system features a higher resolution 480P display, and a 44 percent larger LCD projection screen. The new system projects a windscreen image that is equivalent to a 10-inch display.

A revised graphical user interface (GUI) provides an uncluttered, modern layout for optimal legibility and provides additional functionalities such as lane-guidance for the Turn-by-Turn navigation. In addition, the HUD position can now be linked to the IMS system for two different drivers.

2023 Palisade Highlander features Hyundai Australia’s first application of the new Digital Centre Mirror (DCM). This full-display digital centre rearview mirror uses a separate rearview camera mounted below the tailgate spoiler to allow the driver to clearly see behind the Palisade without the obstructions of passengers, cargo or even heavy rain.

The DCM provides a 44-degree rear view angle, which gives the driver a substantially better view compared with the 20-degree view angle of a conventional rearview mirror.

The DCM can revert to a conventional ECM rearview mirror with the flick of a lever and can also be adjusted for view height and brightness while automatically lowering the image (as the dipping side mirrors do) when reversing, for a seamless experience.

In addition, every 2023 Palisade now features a frameless rear-view mirror for a more premium look and an increased field of view.

2023 Palisade’s bold style is enhanced with the addition of hidden exterior lighting. At the front, LED turn signals are integrated seamlessly into the radiator grille elements, only becoming visible when indicators are activated.

Exclusive to Highlander variants, hidden rear parking lights form part of the lighting signature when switched on, but blend into the satin chrome tailgate trim pieces when switched off.

Further to the exclusive Highlander lighting features and adding a premium touch to every 2023 Palisade variant are the following revisions to the lighting system:

2023 Palisade features a revised Smart Key remote with Remote Start functionality as standard. With the Hyundai Bluelink™ app, the driver can also Remote Start the vehicle via their smartphone.

When parked, Palisade can be switched off and locked without the need to re-enter the vehicle. RSPA utilises all 12 ultrasonic sensors fitted to Highlander variants and will pause a parking manoeuvre if it detects an object in its path.

The Type-C power outlets are designed around the new Power Delivery 3.0 standard and increase output to 27W / 3A for increased charging output.

The Multimedia USB input remains as a USB Type-A.

2023 Palisade Highlander features a revised wireless charging pad with the output increased from 5W to 15W for improved charging performance.

The new wireless charger can reduce smartphone full-charge time by up to 33 percent. Contributing to the increased charging performance is an in-built cooling fan, which is designed to cool the wireless charger’s internal components (rather than the smartphone).

The new ‘Custom’ button (denoted by a star) allows the driver to program their desired function, ensuring their most-used vehicle functions are at their fingertips.


Standard features of the new 12.3-inch multimedia unit also include:

2023 Palisade sees the adoption of convenience opening & closing of the power windows via the new Smart Key remote. This new function can also be operated through the Hyundai Bluelink™ smartphone app.

Adding a premium touch to the power window operation, new 2023 Palisade introduces, for the first time on a Hyundai vehicle, Variable Speed operation of the power windows. When the windows open and close, a slowing down of the window function at the beginning and end of their travel results in a soft open or close, improving Palisade’s audible quality perception.

The launch of the 2023 Palisade sees the Australian debut of Bluelink™ connected car services, marking a step change on Hyundai’s mission to create smart mobility solutions and a better future for everyone.

Bluelink™ and the accompanying connected car services are provided free of charge for the first 5-years of new vehicle ownership and is transferrable to subsequent owners within this 5-year period. 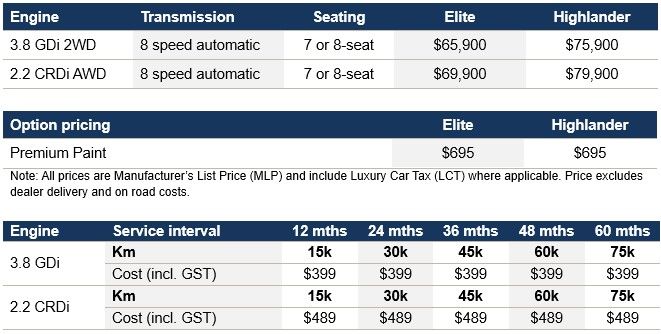 (Green indicates additional specification over the previous MY22 Palisade variants) 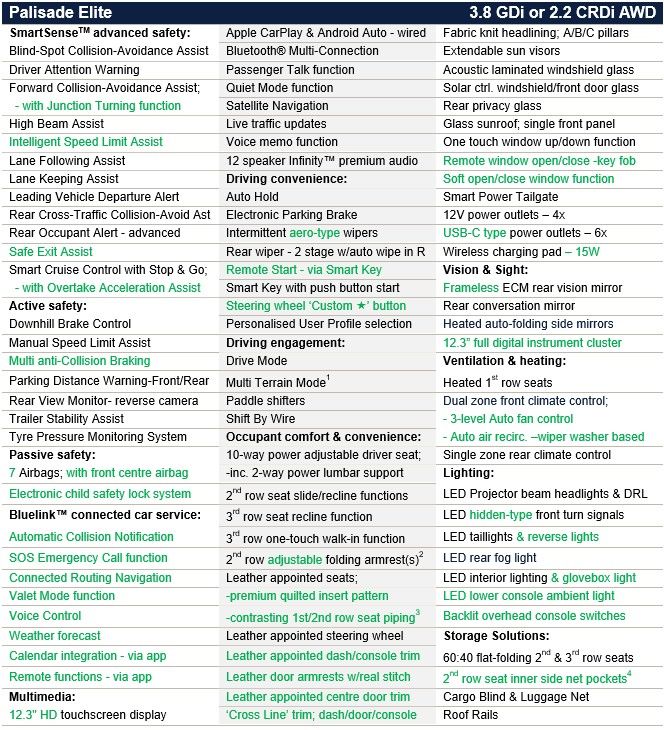